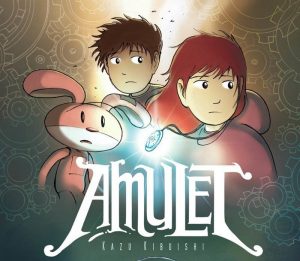 If you're unfamiliar with Amulet, all you have to do is mention the series to any elementary-aged kid in your general area and you'll likely get an enthusiastic recounting of its many virtues— it has adventure! High stakes! A portal to a magical world! Kids taking charge to save a parent! Add in a whole lot of heart and it's easy to see why both kids and adults love these graphic novels. I, for one, picked up the first book intending to just read a few pages to get a feel for it and ended up finishing it in one sitting.

For anyone who needs something to fill the void until the final two books in the series come out, the following titles are some of my go-to Amulet read alikes. They're in full color (which can be non-negotiable for some people) and they have elements of adventure and/or fantasy while always keeping a focus on kids' lives and concerns. While I've highlighted 6 books here, make sure to check out the booklist at the end for more ideas!

This lively story was a favorite of my coworker's 11-year-old! Fast-paced and full of intrigue, Newsprints follows Blue, an orphan who disguises herself as a newsboy and worries about people discovering her secret.

Avani doesn't fit in with the other girls at her new school or her Flower Scouts troop. When she gets kind-of, sort-of abducted by a quirky little alien she finds some kindred adventuring spirits in the Star Scouts, leading to some action-packed and funny high jinks!

Pretty much all of Doug TenNapel's graphic novels (Nnewts, Bad Island, Cardboard, Tommysaurus Rex) are fantastic tales of adventure that also manage to have a ton of humor and heart. Ghostopolis is similar to Amulet in that a boy goes through a portal to another world and must use his wits to find a way out.

Delia Bean finds that instead of the boring summer break she's been expecting, she's now been offered a chance to compete with a handful of other kids from different centuries for an internship at the Earth Time Museum. Time travel, teamwork, thrilling adventure— how can you go wrong?

Another time travel tale, Time Shifters sucked me in with its drama, adventure, quirky characters, humor, and readability.

This exciting and rich series follows Oona Lee and two other unlikely heroes who must team up to save five alien worlds on the brink of extinction.

Check out the full booklist: Graphic Novels for Fans of Amulet!