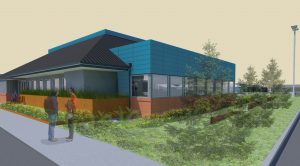 Join the King County Library System (KCLS), community leaders, Friends of the Library and area residents to celebrate the grand opening of the Kent Panther Lake Library—which marks the 50th library in the System—on Saturday, March 23, at 9:30am. Celebrate this landmark occasion with a festive ribbon-cutting ceremony, live music and a self-guided tour. The new library is located at 20514 108th St. SE, Kent, WA 98031.

The $3.3 million library was the final new KCLS facility to be completed under the $172 million Capital Bond measure, which, to date, has funded 17 new libraries, expanded 11 libraries, renovated 15 libraries and expanded two parking lots. Kent Panther Lake Library is a tenant-improvement project in a highly visible and accessible location on Kent’s East Hill. The 5,300 square foot library, originally called East Hill of Kent Library, was renamed with input from the community.

“We are thrilled to open KCLS’ 50th library and know that the residents of Panther Lake share that excitement. We are grateful to King County voters for supporting the 2004 Capital Bond measure, which made it possible to build this vital community asset that will serve library patrons for generations to come,” stated KCLS Executive Director Lisa Rosenblum.

In addition to repurposing an existing building, the library includes many green features, such as energy-efficient windows to bring more sunlight in while reducing electricity costs; specialized sensors to reduce costs by controlling interior and exterior lighting; low-flow plumbing fixtures; low-odor paint; carpeting made from recycled contents; and energy-efficient mechanical systems to improve ventilation and air conditioning.

The new public space will serve as a place to learn, connect with colleagues, friends and family, and find opportunity through numerous community events, programs and services—all for free. The Kent Panther Lake Library will have new materials, computers, wireless access and designated spaces for children and teens, and it’s also the new home of three pieces of art by renowned Northwest artist Jacob Lawrence, entitled “Strategy” (1994), “St. Marc” (1994) and “The Coachman” (1990).

The grand opening festivities will include a performance by IPB: International Praise Band, an international group of musicians that blend elements of Latin and African rhythm, soul, gospel and contemporary worship, a KCLS ideaX 3D Pen Activity and a crafting table for kids.

About King County Library System:
Founded in 1942, the King County Library System (KCLS) is one of the busiest public library systems in the country. Serving the communities of King County (outside the City of Seattle), KCLS currently has 50 libraries and more than 700,000 card holders. In 2011, KCLS was named Library of the Year by Gale/Library Journal. In 2018, residents checked out more than 4.8 million digital eBooks and audiobooks through Rakuten OverDrive, making KCLS the #1 digital circulating library in the U.S. and #3 in the world.