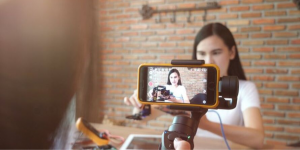 The King County Library System (KCLS) is pleased to present the KCLS Reel Fest winners! On September 28, KCLS premiered the top 10 films and announced the winners at the virtual KCLS Reel Fest Film Premiere and Awards Show. Visit kcls.org/reelfest to watch the production and see the films.

KCLS Executive Director Lisa Rosenblum stated, “Congratulations to all the KCLS Reel Fest winners and finalists! Thank you for sharing your love of the library with us. Your stories were truly inspirational, and we wish you the best in all your future creative efforts.”

In October 2019, KCLS launched KCLS Reel Fest, a short-film contest and festival that asked patrons of all ages and filmmaking abilities, “What does the library mean to you?” Residents in the KCLS service area were invited to share their library stories in a two-minute film for the chance to win up to $1,000 and a slot in the KCLS Reel Fest film lineup.

KCLS Reel Fest and cash awards were made possible with support from the KCLS Foundation.