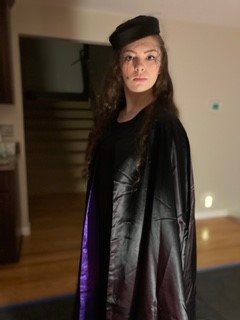 She wiped the sweat from her brow, leaving a brown streak of mud across her forehead. After a few seconds’ break, she continued to chop limbs from the monstrously overgrown rhododendron. It hulked over her diminutive frame, requiring her to lift the heavy loppers over her head to prune. Glancing upwards into the hardy branches, and squinting against the low, gloomy Seattle cloud cover, she noticed yet another thick, tangled spider web. A zigzagged scar ran from the ragged lower edge of the construction to its very middle, where a long-legged, brown-bodied spider hung creepily. The sight of it made her shudder. Eyeing it, she adjusted the angle of the rusty blades. She needed to sever the branch which the web was drooping from. Being careful to cut it with the blades tilted precisely, the webbed bough would drop to the ground beside her. She squeezed, and the thick arm splintered loudly. She had made a grave miscalculation, however, causing the unfortunate branch to crash down upon her. The knowledge that the web and its weaver were still clinging to her body dripped as a chill down her spine.

Hurling the loppers onto the wet, mossy turf, she slapped violently at her face, hair, neck, and shoulders. The spider had been huge! Its long, spindly legs stretched at least four inches from side to side. Horribly, she knew, at this very moment, it was somewhere, crawling on her. She forced herself to be still in an attempt to sense it. A cold sweat broke out on her face; she could feel nothing. Her mind raced with terrifying possibilities. Then, she felt a tickle and a tremble on the back of her right hand. Twisting her arm, she watched the spider slowly stalk up the exposed section of skin at her wrist. She instinctively slapped at it with her left hand and felt a wet pop. Grimacing in horror, she witnessed an enormous, sticky, yellow glob oozing out of what was left of the spider. Its innards dripped onto her hand and remained, while a watery portion of the entrails slid down and dribbled between her fingers. She flicked her hand vehemently, flinging most of the viscera into the air. Frantically, she wiped her hand in an erratic fashion in the rain-saturated grass, while exclaiming out loud, “Eww! Eww! Eww!”

The Arachnid War of 2020 had begun four weary months ago. Usually, the onslaught didn’t commence until September, but this year it had started in early July. Nothing, however, was normal in 2020. She had often risen to discover that webs had been spun in the most inconvenient of locations. They lurked right where she wanted to sit on her deck, perfectly blocked each and every sidewalk, and rigidly stood sentinel in front of the flowers that needed deadheading. It was a frequent occurrence that, when she was walking along, deep in thought, a web would stretch right across her face. Panic always ensued such an ambush. The haunting way the webs’ whisper-thin threads clung to her even after she had brushed, scrubbed, and checked her face scores of times in a mirror was unnerving. Now, not only did she have to clip slimy, brown, wasted plants and sever the limbs of contorted, rough-barked shrubs, but she also had to combat the unwanted intruders. She had dismantled a shocking twenty-five webs on that very day. Finally! No more were left in her domain.

As she squatted on the lawn, shivering with unease and nausea, she felt a prick on the back of her right hand. She looked fearfully at her appendage, prying the hem of her sleeve back to peer at her wrist. A painful tremor, like a muscle spasm, had begun. Every convulsion shot a stream of pain up her wrist and forearm. Her harried mind jumped to all sorts of frightful conclusions. Had the spider oozed venom which had irritated her skin? Was she suffering an allergic reaction to the insect’s chemical innards? Or could it be something more disturbing?
The next morning, she rose and stumbled to the bathroom. Through the window, she had an overlooking view of her back yard. Her heart rate intensified, her breathing quickened, and her stomach lurched. She gasped with disbelief as she observed the spider webs, which stood out like reflective-painted signs in the morning dew. There were now more than double yesterday’s number of tangled mesh tapestries.

She rushed to get dressed for yet another battle in her yard. Determinedly, she grabbed her rain boots. As she thrust her left foot into her boot, she could have sworn she felt a wiggle under her sock. Surely, her mind was playing tricks on her! She strove to calm her shaky breathing, reprimanding herself for allowing her imagination to spiral out of control. Clearly, she was just imagining things, so she resolutely straightened up and marched onto the battlefield. Today, she faced a combined enemy: the spiders, and the persistent sensation that tickled under her toes. She tried to distract herself by decimating the plentiful webs with the worn triangle of an old broom. Hours passed as she wasted energy and labor that was meant for tending her plants on taking down the encroaching webs. Finally, she could no longer take it. Throwing the broom down, she scurried inside and yanked the provoking boot off. Tentatively, she rotated the boot and shook it upside-down over the dirt-sprinkled floor. A half-dead spider, twitching faintly, fell out and lay upon the ground. Reaching her limit, she decided she needed to calm herself with a pot of tea and a Great British Baking Show marathon. No more outside for her for the rest of the day.

When she walked to the window the following morning to admire the sunlight which was finally making an appearance, she was met with a terrifying sight. The spiderwebs had yet again doubled overnight. The copious, impenetrable webs were strung from shrub to fence like a sinister banner. They draped in great adhesive sheets, creating shabby curtains over the dying autumn. Their serrated edges were lined with robust cables. Each separate link in the ghastly chain supported an enormous spider. As their webs waved and rippled in the forlorn gusts of fall, the spiders seemed to grow and shrink before her petrified eyes.

In the window, she caught a glimpse of her own transparent reflection. A gasp escaped her lips. There was something across her face! She recognized the all-too familiar shape, which was raised in iridescent lines across her countenance and down her neck. Slowly, her trembling fingers reached up. A raised ridge of tough skin was creating the pattern. She spread her hands over her face, tracing out the shape of the disturbingly recognizable spiderweb on her forehead, cheek, chin, neck; where else did it scar? The silken cords lay under her skin, and when the light shone on them, they were iridescent. Still staring in disbelief at her reflection, she fingered the cruel lines down her arm. There was another raised web covering her right hand. She spun and rushed to the mirror, turning all the lights on, causing the cursed lines to shine even brighter.
Something twitched between the chilly tile and her foot. It was the same sensation that had not only troubled her waking hours yesterday, but also throughout the previous fitful night, tormenting her with nightmares. She dropped to the ground in an impulse of terror as the feeling which had been driving her crazy for so long suddenly mounted in intensity. She turned her foot over and saw an utterly revolting sight: under a clear bubble of her own skin, throbbing in unison with her heartbeat, pulsed a twitching spider.