Power is out at some locations. Check individual library location pages for modified hours and services. Holds requests and items in transit may be delayed. Power remains out at our facility that ships materials between library locations. Puget Sound Energy estimates that power will be restored on Saturday. 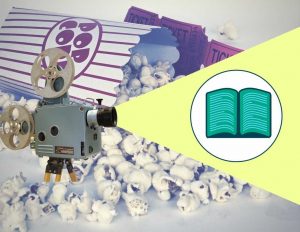 Some of my favorite teen books are getting the movie treatment in the next year or two. While many books get optioned—meaning a movie studio buys the rights to the story—many fewer make it into production and onto the big screen. While we're used to seeing big budget dystopian adaptations, this upcoming slate is a mix of genres including contemporary realistic, historical fiction, dystopian, and science fiction. These movies are all either completed or currently filming, so be on the lookout for them in 2018 or beyond. That gives you plenty of time to read the book before the movie!

I have recommended Simon Vs. the Homo Sapiens Agenda before, and I will do it again. This is a sweet love story full of humor and realistic relationships, including romantic, friendship, and familial. Since a lot of the story occurs over email, it will be interesting to see how that translates off the page. You might recognize Nick Robinson, who plays the title character Simon, from Jurassic World or another YA adaptation, Everything, Everything. And Jennifer Garner and Josh Duhamel play his parents!

Attempts have been made to adapt this classic time-and-space-bending story in the past, but this movie adaptation is on another level. Produced by Disney and directed by up-and-coming superstar director Ava DuVernay, expect this one to make a splash at the box office. I can't wait to see actress Storm Reid as protagonist Meg Murry, who's searching for her father who seems to have disappeared to another dimension. (Oh yeah—Oprah Winfrey, Reese Witherspoon, Mindy Kaling, and Chris Pine are in it too!)

A Wrinkle in Time

Dystopian sci-fi adaptations aren't done yet. In The Darkest Minds, most children are killed by a mysterious disease. The ones who survive develop extraordinary, often dangerous, powers, and are sent away to camps to keep them under control. This is the story of a group of kids and teens who escape and go on the run from the government. Amandla Stenberg stars as Ruby, a 16-year-old girl with the power to manipulate people's minds.

In Patrick Ness's Chaos Walking series (of which The Knife of Never Letting Go is the first book), Todd and his dog, Manchee, live in a world where everyone can hear everyone else's thoughts and there are no women. That is, until Todd finds a place that is silent and in that place he finds a girl. Because of these secrets, Todd and Manchee are forced to run for their lives in this fast-paced other-worldly story. With the star power of Tom Holland (fresh from the recent Spider-Man: Homecoming) and Daisy Ridley (of Star Wars fame), this adaptation is poised to be a hit.

The Hate U Give (unknown release date - currently in post-production)

The Hate U Give has been a breakout success for debut author Angie Thomas this year, spending 38 weeks and counting on the NY Times Bestseller list. In this book, teen protagonist Starr tries to make sense of the world after witnessing a cop kill her friend at a traffic stop. This timely story has resonated with readers and will reach even more people with a wide movie release. Amandla Stenberg (who also stars in The Darkest Minds, see above) will bring Starr to life in this adaptation. Check out the movie's Twitter feed for behind the scenes filming photos and lots of infectious joy.

In this supremely fun, fat-positive teen novel, Willowdean Dickson decides to enter the Miss Teen Blue Bonnet competition in spite of her conflicted views about the whole enterprise, along with a ragtag crew of other unlikely beauty pageant contestants. Australian actress Danielle Macdonald, a relative newcomer to Hollywood, stars as Willowdean, with Jennifer Aniston playing her mother. Most importantly, Dolly Parton, whose music plays an important role in the book, will be writing a new song for the movie!

The sweet romantic comedy To All the Boys I've Loved Before is also coming to the big screen soon. In this story, Lara Jean Covey writes letters to all of her crushes past and present, never intending to send the letters. But her younger sister, in a fit of jealousy, sends the letters forcing Lara Jean to deal with the fallout. Look for Lara Condor (most well-known for playing Jubilee in X-Men: Apocalypse) to play Lara Jean.

Ashes in the Snow (unknown release date - currently in post-production)

For something a bit different from most of the other books-to-movies on this list, Between Shades of Gray (retitled Ashes in the Snow for the movie) is a historical fiction novel about a Lithuanian teenage girl sent to a work camp in Siberia during World War II. This is a moving story about real-life atrocities that should make an interesting, if bleak, movie.

For even more book to movie adaptations, including adult fiction titles, check out the list Books to Movies 2018 and beyond.