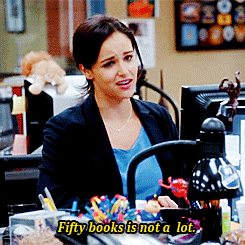 If you're a fellow fan of Brooklyn Nine-Nine, you likely watch it for its silly-yet-smart sense of humor, its overabundance of heart, and most of all, its unique characters. While I love them all, the character who speaks most to my book-loving soul is the high-strung, high-achieving, bookish Amy Santiago. This is a woman who formed an entire heist action plan around the characters and plotlines of the Baby-sitters Club— how could I not love her?

So what do we know about Amy?

Amy’s Baby-sitters Club doppelganger is Mary Anne, an organized, sensitive bookworm who loves her friends. Between this and her unashamed enthusiasm for the books of her childhood, I don't think Amy would have any qualms about reading young adult novels. The first one that comes to mind is I Believe in A Thing Called Love, a lighthearted romcom about a girl who is determined to nab her first boyfriend using tips from the Korean dramas her father loves. I think Amy would see echoes of herself in Desi's top-notch planning skills, close relationship with her father, drive to succeed at her goals, and slight social awkwardness.

I Believe in A Thing Called Love

The Baby-sitters Club and Amy's other favorite, Harry Potter, share common characteristics: they both have that real-world-yet-better feel, strong stories, well-established worlds, and groups of great characters who have each other's backs. The latter seems particularly important to Amy, as it's something that also characterizes her relationship with co-workers and her childhood growing up with seven brothers.

One book that has a little of all these characteristics is Six of Crows, a satisfying heist story full of teamwork and adventure with a crew of lovable criminals. It's also set in a rich, well-realized fictional world that feels like a cross between 1800s Amsterdam and Las Vegas.

We can't forget Amy's love of crosswords, either. Far from being a casual crossword fan, Amy is a true word nerd, so I think she would find Word by Word by Kory Stamper to be fascinating and approachable. This personable and trivia-filled peek into how dictionaries are made is written by an editor for Merriam-Webster dictionaries.

We know that Amy's read the classics (when Jake refers to Iago, the parrot in Aladdin, Amy's mind defaults to the character in Othello), which I can see her continuing to do as an adult. I envision Atlas Shrugged as being one of those books on her bucket list that she'd read, if not necessarily for the enjoyment of it (I think she would actually hate-read it, judging by her dedication to teamwork and community), at least for the challenge and satisfaction of conquering this 1,100-plus-page tome.

Amy reads books as a way to learn and explore new things, so it makes sense that she would hit the stacks when planning her upcoming wedding. And forget "inspiration" books, Amy would want to get down to the nitty-gritty of planning for the big day. Therefore, I think something like The Knot Ultimate Wedding Planner Worksheets, Checklists, Etiquette, Timelines, and Answers to Frequently Asked Questions would be right up her alley.