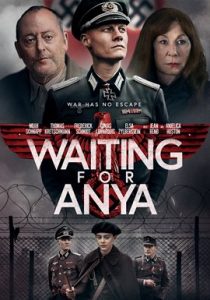 Guest post by a 9th grader at the Shoreline Library. This movie is available on demand through Hoopla.

In 1942, Jo lives in a remote French Pyrenean village of Lescun, near the border with Spain. His father hasn't been home for years and is now a German prisoner of war. For Jo this means that he has to take over many of his father's tasks, including tending the sheep.

One day, Joe meets a mysterious man, Benjamin, who hides at a cottage near the pastures. Benjamin is a Jew and was separated from his daughter Anya years ago in the turmoil of WWII. They agreed to meet at the cottage of the widow Horcada, where Anya was born and her mother died in childbirth.

While waiting for Anya, Benjamin has set himself the task of bringing refugee children of different origins across the border to Spain, a country that espoused neutrality as its official wartime policy. But in the meantime, Vichy France falls, and the German soldiers arrive in the village. Jo decides to help Benjamin in his efforts but must be cautious, for the Germans patrol everywhere.

This is a great WWII film for middle schoolers, although the historical background is kept at a minimum.