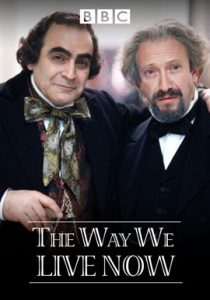 The series is based on Anthony Trollope’s book with the same title. The story was intended to be a satire and was inspired by the level of corruption in the English society that Trollope experienced. Perhaps most of us know David Suchet from the Agatha Christie film series as the smart Belgian detective Mr. Poirot, who can always discover the truth. In this film Suchet plays the other side: he is the unscrupulous, greedy, and incredibly rich financier Augustus Melmotte, who can deceive the whole world.

After some failed Viennese deals, Melmotte moves to London with his family and dreams not only of becoming a real English gentleman but also of expanding his power through a career as a Member of Parliament. Melmotte knows that appearance is everything, thus hosts lavish parties to impress the high society. He is also seeking new business deals and, just as called for, he hears about the construction of a new railway line from Salt Lake City, U.S. to Veracruz, Mexico. However, he doesn't want to earn his money with hard, honest work, but by going public with his shares, driving up the price with fake news, and then selling everything.

On the board of the railway company is Sir Felix Carbury, a young aristocrat who has gambled away the savings of his widowed mother. In order to restore the status quo and get creditors off their family’s back, his mother proposes an engagement to Marie, Melmotte's only daughter. But Melmotte cannot imagine his daughter with a penniless husband and blocks the marriage, breaking Marie's heart. The plot takes several twists and turns when Melmotte's machinations in the railway business are uncovered by a journalist and Felix falls in love with another woman. But Melmotte is smart and may manage to fool everyone one last time!

A great costume drama with suspense, comedy and poignancy. Recommended for ages 13 and older.