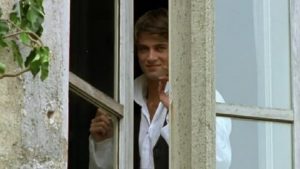 The Red and the Black [streaming movie]

This two-part film is an excellent adaptation of Stendhal’s historical novel Le rouge et le noir from 1830. To remain faithful to the book as much as possible, the director chose to incorporate some extracts in the form of monologues using voice-over techniques. The plot is set in France in the 1820s, after the Bourbon Restoration and just before the July Revolution, giving a perfect overview of the post-revolutionary and post-Napoleonic society.

The exiled aristocracy has returned but cannot exert any real political influence and has to compete with the rich bourgeoisie. The proletariat feels suffocated and deprived of a meaningful future, just like the eighteen-year-old, handsome main character, Julien Sorel, who is full of ambitions. But as times have changed, talent alone cannot ensure social advancement. The secret Bonapartists is just the son of a carpenter who is dreaming of escaping his condition either by joining the army (rouge) or entering priesthood (black). The former is not possible without a title, so Julien dedicates his time to learning Latin. He is off to a promising start, as he is hired on the recommendation of Father Chelan as a tutor for the son of Monsieur de Rênal, the mayor of Verrières.

Very quickly, Julien gets closer to his employer’s wife, Madame de Rênal, and seduces her. A scandal is brewing, but Madame Rênal convinces her husband that it was all just a rumor, and even secures Julien a scholarship for a seminary. Julien becomes the protégé of Abbé Pirard, who has connections with the diplomat Marquis de la Mole. Julien soon finds himself in Paris as secretary of de la Mole. Eager to climb even higher on the social ladder, he feigns his beliefs, becomes hypocritical and seduces de la Mole's daughter.

After a long period marked by tension and conflict, the marquis seems to change his mind about making Julien his son-in-law. Thus Julien is given a title and a position in the army. But before the wedding can take place, the marquis receives a letter from Verrières: Julien is not at all what he seems to be. And just as fate seems to favor Julien once again, he reveals his true colors. Although the film is well over 3 hours long, it is a captivating story.

Recommended for ages 14 and older.