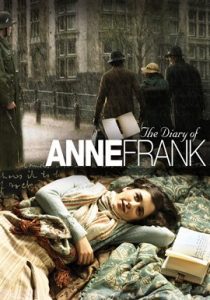 The Frank family fled from Frankfurt to the Netherlands, trying to escape the Nazis. But two years later, a new disaster looms and Otto Frank decides to go into hiding with his wife Edith and their two daughters, Margot and Anne.

With the help of his secretary Miep Gies, Otto has prepared a hiding place in the back of his company headquarters. Soon after, they take in another family. As work in the same house continues as usual, the eight people are hardly allowed to move during the day, for any loud noise can have fatal consequences. A connection to the outside world is only possible via Miep and the radio.

Nevertheless, something like everyday life comes into play: people argue, make up, laugh, and hope - always in fear of being discovered at any time. All this is recorded by Anne, the youngest in hiding. She entrusts her observations and thoughts to the diary that she had just received from her father as a present for her 13th birthday.

This film adaptation shows Anne not as a heroine but as a teenage girl who struggled with herself and her environment for almost two years with seven other people on less than 60 square meters without a place of retreat. The film describes Anne’s everyday life in hiding, a fragile normality in which she herself also has her say. Recommended for ages 14 and older.