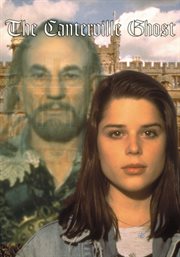 The family of an American physicist moves to a rural area of England for four months. The father is on a research assignment and is already in England, in Canterville Hall Castle, which he has rented, when his wife arrives with their teenage daughter Virginia and their younger sons Adam and Washington.

The rental agreement comes with a butler and cook, who both live at the castle. Virginia is fascinated at first sight by a painting of Sir Simon de Canterville, an ancestor of the Canterville family from the sixteenth century. At first she is bored with the old building, but this soon changes when young Francis, Duke of the neighboring estate, visits.

Already on the first night, the castle ghost, whose presence can only be suspected by hints from the servants and the villagers, haunts the rooms, rattling and moaning in chains. At breakfast, both the boys and Virginia talk about the nocturnal noises, but find no ear with their father, who – as a scientist – does not believe in supernatural phenomena. Even a blood stain in front of the fireplace, which, according to the cook, has been there for centuries and could not be removed by anything, does not impress the parents and is simply wiped away by the mother with a stain remover.

In the following nights, Sir Simon, appears to the children, but does not frighten them for long. Since the parents can’t see the ghost, they don’t believe their children. Even worse, the father suspects his daughter of orchestrating the nightly haunting to sabotage his research trip and to persuade the family to leave England. Virginia and Sir Simon soon become friends, and they agree to play a scene from Hamlet with Sir Simon playing the ghost of Hamlet’s father.

Will they manage to convince Virginia’s father of the ghost's existence and of Virginia’s innocence in the nightly actions? The audience will learn about the ghost's past and the prophecy that can bring lasting peace to Canterville Hall Castle. Sir Simon believes that perhaps Virginia can help. This is a great family film that is based on the book with the same title by Oscar Wilde.

Recommended for ages 10 and older.