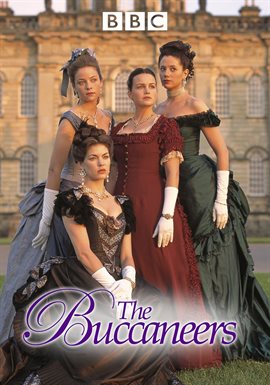 Every week a guest teen reviewer shares a book, movie, or music recommendation.This week's guest post is by a 10th grader at the Shoreline Library.

The plot is based on Edith Wharton’s unfinished book by the same title. The story begins in 1876 in New York, where the daughters of the nouveau riche are presented on the marriage market. Among them are Nan and her friends. Although they are rich and beautiful, they are denied access to the highest social circles, and their prospects for a good marriage look bleak. But their English governess, who maintains the best relations with the British aristocracy, knows what to do.

She travels with her protégés to London, where impoverished counts, barons, and lords are just waiting to make a good match. Soon, several noble men are taken with the free-spirited, beautiful "Buccaneers" and are enchanted by the wealth of their fathers. However, the girls’ domineering caretaker did not reckon that unnecessary emotions, such as love, or competition from British ladies could ruin her plans. Especially Nan’s situation is difficult, for she is more drawn to the intellectual Guy than to the wealthy duke, Julius.

The Buccaneers must fight for their happiness and navigate between tradition and modernity, between acquiescence and rebellion. Although the BBC version differs from the book and – somewhat disappointingly – weaves contemporary elements into the plot, the ending remains true to the version Wharton intended. The film critically examines the British aristocracy of the late 19th century. Recommended for ages 14 and older.