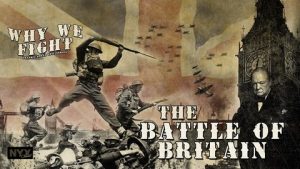 The Battle of Britain [streaming movie]

The documentary uses only original black and white material to tell the story of the Battle of England. After the victory over the French in the summer of 1940, the Wehrmacht prepared for the invasion of Great Britain. The Germans' four-stage plan recognized the importance of gaining air supremacy over the British Isles before sending in troops.

But the German pilots encountered a very resolute opponent: the Royal Air Force. The RAF made every effort to avert a German victory. The RAF was numerically inferior to the German Air Force, which meant that the chances of winning the battle were small. Nevertheless, the British pilots fought with great commitment against the German bomber units, and although they suffered considerable losses, it was about one third of those of the Nazis.

Soon, the Nazis began bombing London in order to induce the population to surrender. Although the British civilian population suffered heavy losses in these attacks, they remained composed and did not give in.

The footage shows how people spent the nights in the Tube stations. With the heavy fighting in the British capital, the attack pressure was lifted from the main military airfields, marking the turning point of the battle. The German losses quickly reached a critical level, the Luftwaffe did not achieve air sovereignty over England, and had to call off the attacks on British territory. The information and graphic elements that are inserted from time to time fit well with the commentaries.

Recommended for ages 12 and older.