Curbside to Go pickup and book drops are now available at select libraries. Find locations and hours. Get updates on Our Path to Reopening page. 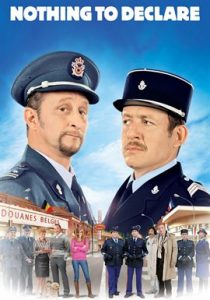 Guest post by a 9th grader at the Shoreline Library. This movie is available on demand through Hoopla.

Nothing to Declare [streaming movie]

Ruben Vandevoorde is a Belgian customs officer, stationed at the Belgian-French border. Growing up with a strong patriotism and a deep-seated anti-French sentiment, he has the perfect job to live out his unrestrained racism. But the creation of the single European market is the sheer disaster for the pedantic bureaucrat.

Regardless of all politics, he wants to carry on as before and treat every Frenchman as a potential smuggler. Sure enough, this intransigence soon causes trouble, and he gets the worst of all punishments: he has work with his French colleague Mathias Ducatel. As a mobile patrol, the unequal duo is supposed to look for smugglers in the rural border area. To complicate matters, the Frenchman is secretly in love with Ruben's sister Louise. One hilarious situation follows the other, and the path to friendship proves to be a rocky one.

The film examines the historic rivalry between the French and the Belgians. With slapstick humor and subtle irony, the endearingly eccentric characters reveal the absurd excesses of nationalism and country clichés. In his role as a quick-tempered customs officer, the Belgian star comedian Benoît Poelvoorde proves himself a worthy successor to the Gendarme of St. Tropez, played by Louis de Funès. This movie is great for kids who are 12 and older. In French with English subtitles.