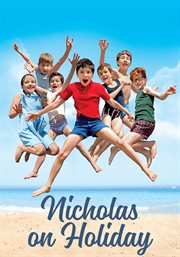 This family comedy from 2014 is based on the Nicolas books by René Goscinny and Jean-Jacques Sempé, which depict an ideal childhood of the late 50s in France. The film certainly gives you an old-fashioned, fifties atmosphere, with old cars, elaborate hair styles, and colorful parasols. It is neither a director's film, nor an actors' film, nor a screenwriter's film, nor even a producer's film, but a decorator's and costume designer's film. The message of the film is clear: Those were the good old days, when humor was good, men smoked pipes, women took care of the house, and kids could behave like little rascals.

When the school ends, Nicolas and his family hit the road and head to the French Riviera. After an adventurous start, he, his parents, and Granny check in at the Hotel Beau-Rivage. Of course, there is a little problem with the reservation, and Nicolas' father starts to regret the whole vacation. Initially, Nicolas spends a lot of time writing letters to his girlfriend in Paris, but soon, he meets a few boys on the beach and time begins to fly by.

But the summer fun seems to slow down when Nicholas' parents meet some old friends, for they have a daughter, Isabelle, Nicolas' age. After the parents make a few harmless jokes about the children, Nicolas begins to believe that he will be forced to marry Isabelle. Thus, the nonsense begins, for the boys try everything they can think of to prevent the unwanted wedding ceremony. The ideas are brilliant, but they all backfire. To turn this film into a true family movie, the plot focuses on the parents as well, and there is plenty of cause for amusement. Themes such as temptation, loyalty, young love, and friendship are well explored and presented in a funny, cute way.

Recommended for ages 12 and older. In French with English subtitles