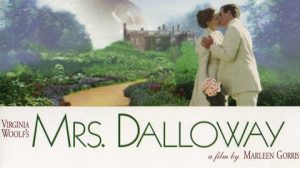 Watching this clever adaptation of Virginia Woolf’s masterpiece will never replace the reading experience. But director Marleen Gorris shows the abrupt changes in time levels and narrative strands just as skillfully as the book to provide deep psychological insights into the English urban society in 1923, five years after the end of World War I.

On a June day, Clarissa Dalloway thinks back on the days of her youth and the decision she made. While her mind is constantly shifting between the past and the present, she spends the day preparing for one of her famous parties in the evening. She leaves the house, in a world-embracing mood, dressed like an exquisite work of art, light-footed like a strange bird. But her thoughts always return to the question of whether she made the right decision when she entered into a comfortable marriage with the successful politician Richard Dalloway. Her concealed depression becomes more and more obvious as time goes by, and the puzzle pieces of her past began to reveal the full picture.

Her former admirer, Peter Welsh, emerges after the many years he spent in India, and Clarissa cannot help but wonder whether she could have led a much more romantic, exciting, and adventurous life if she had chosen Peter. The appearances contradict the characters’ true desires and inner struggles, and themes such as time, interruptions, and questions pf mental health influence the outcome of the day. The seemingly unconnected threads of different lives all come together, clearly reflecting the peculiarity of Woolf’s technique.

Random occurrences, circumstances, and perceptions all have their place and line up in due course, like pearls on a necklace or the thoughts of Mrs. Dalloway. The stream of consciousness is depicted on the film accurately: the transitions are flowing, the scene changes are guided by the camera's gaze, the narratives, or inner eyes. The camera discreetly assumes the task of Woolf's diction, and creates a narrative without a narrator.

Will the party be a success? And most of all, will Mrs. Dalloway find her happiness? The film is an excellent critique of British post-war society, which, through politeness, fashions, and lavish parties, feigns the idyllic times that no longer exist. Through Mrs. Dalloway, the viewer will witness a social class drowning in its own outfit in a world that has been damaged.

Recommended for ages 14 and older.