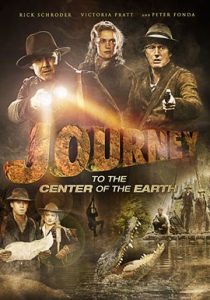 Journey to the Center of the Earth [streaming movie]

The stories of Jules Verne have not lost their appeal to filmmakers, as this adaptation of the Journey to the Center of the Earth with Ricky Schroder, Victoria Pratt, and Peter Fonda shows.

Instead of being set in Europe, the story takes place in America and tells the fate of the second group of explorers. Nevertheless, the adventures are just as imaginative and exciting as the ones Verne penned down.

Anthropologist Jonathan Brock is a man of great ambitions but meagre means. The beautiful and wealthy Lady Martha Dennison promises to change the latter if Brock helps her find her husband who has disappeared on an Alaskan expedition. A sketchy map left by Mr. Dennison makes her to believe that he has found a tunnel leading to the earth’s core. Brock, his nephew – the ambitious journalist Abe – and Lady Martha head north, to find the mysterious opening, which is only visible on one special day of the year. After a few days, they arrive at a mine shaft and venture deep into its interior to find a lively world with a diverse but completely alien flora and fauna.

A few scientific hits are given about the natural light phenomena, the prehistoric species, and the verdant landscape, which can exist without photosynthesis, but the movie allocates more time for action. The filmmakers decided to end the story in a way that would find more resonance with fans of American action movies.

Recommended for ages 10 and older.