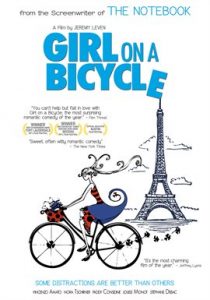 Guest post by a 9th grader at the Shoreline Library. This movie is available on demand through Hoopla and Kanopy.

Girl on a Bicycle [streaming movie]

The Italian bus driver Paolo chauffeurs tourists through Paris, but he has completely different plans for his life. He proposes to his great love, the saucy German stewardess, Greta.

The very next day, however, during one of his bus tours, Paolo sees the beautiful French woman Cécile riding by on a bicycle. She smiles at him, which completely upsets Paolo's plans and causes complications in his love life. Paolo can't get her out of his mind.

To make matters worse, Paolo accidentally hits Cécile with his bus, breaking her leg. He decides to take care of her because of his guilty conscience. Of course Greta is not allowed to know anything about this, which makes the double life he has to lead from now on even more difficult. While Paolo tries to put Cecile's life in order again, his relationship with Greta threatens to go down the drain... This romantic comedy does not just bring entanglements but also new turns by breaking with conventions. The mixture of different nationalities and stereotypes makes the comedy even more delightful, and the viewer is spoiled with lots of beautiful Parisian settings. A romantic story set right in the city of love! Recommended for ages 13 and up.