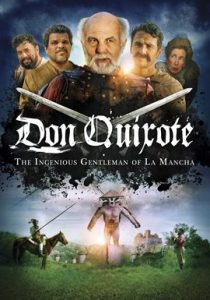 Every week we will have a guest teen reviewer sharing a book, movie, or music recommendation available through the library.

Guest post by a 9th grader at the Shoreline Library. This movie is available on demand through hoopla.

Don Quixote is an older, ailing man. He is an avid reader, addicted to novels of chivalry. After reading many books, he seems incapable of distinguishing between fiction and truth.

He thinks of himself as a proud knight who is supposedly destined to embark on one daring adventure after another and to right all wrongs in the world. Strangely enough, the world plays along, because no one has the heart to tell him the truth, or if they do, they realize that their attempts are futile. Thus, Don Quixote mounts his rickety horse Rosinante and goes to fight windmills, among other things. He associates everything he encounters with knighthood, even though it has been extinct for generations.

Don Quixote also has a devoted niece who is always worried about him. Together with her beau, she is able to outwit Don Quixote and bring him back to his hometown. But how long can new adventures wait? Full of humorous scenes, the movie is a great entertainment on a boring day. Seeing the film is a good alternative to reading the book of Cervantes. Recommended from the age of 14.