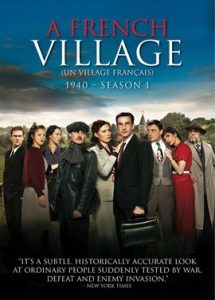 In June 1940, in Villeneuve, a small town in the centre of France, life goes on as usual. But suddenly, a German plane appears, and Villeneuve is quickly overwhelmed by the arrival of the Nazi army.

The people of Villeneuve, who were ordinary French men and women, husbands, wives, aristocrats, or peasants, will become patriots, traitors, collaborators, or resistance fighters. After having collapsed, France is trying to rebuild itself as a new era begins: the rules imposed by the occupying forces are matched by those of civil disobedience. The sabotages infuriate the Germans and they ask the French police to help them.

The series begins rather slowly, but after having seen two episodes it is hard to stop. Dive into this troubled period that you will never forget. Although Villeneuve is a fictitious village, the events seem plausible and real, for they are based on historical documents. Recommended for ages 14 and older.

In French with English subtitles.