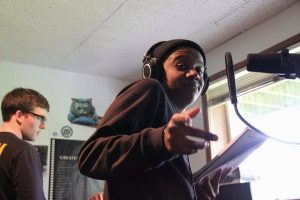 While some people grew up singing in the shower, Marques (AKA Lil Smitty) grew up rapping in the shower. Now a high school graduate, Lil Smitty has two mixtapes under his belt and shows no signs of slowing down.

When I interviewed him in June, Smitty had just dropped his newest mixtape, "PTW (Paved the Way)." He sat down with me at the library to chat about his new mixtape, his influences, and the role his local library (Burien) has played in his music.

How has the library been part of your life?

Well, it’s always a spot people could hang out after school and I’d always use the computers here. And it’s free WiFi, so, you know, everybody loves that.

What's one of your fond memories of coming to the library?

I would say recording the music video right outside of it, for “Seven Days.” Yeah, that’s one of the fonder ones, because it was just off-script, and it was fun. And it’s such an open space, that’s cool.

I know you've gone to a lot of library programs over the years. What's been your favorite?

I would say probably Game On, because it’s fun to challenge your friends, and it’s always something to do on a Thursday after school.

Do you think the library has had an effect on your music?

I would say so; I’ve definitely written a lot of songs here because it’s just a chill, quiet place where you can just go, put some earbuds on, whip out a notebook and just create a masterpiece in front of you, which is cool. So, I’d say that’s one of the biggest reasons it’s affected me.

How long have you been making music?

I’ve been making music since kindergarten, even before that... I started recording when I was in fourth grade because my dad was a producer, so he had all the equipment in his room. So his whole room was a booth. I’ve just been making music ever since. But my junior year of high school I realized that I needed to drop, like, some sort of project, so I dropped my first project, Misunderstood. It was a 12-track. It wasn’t as good as it could have been, but we got it out, and I got a lot of good feedback off of that. Then, my senior year, I knew I could have done better, so I came back [with a] 14-track called PTW (Paved the Way) which is the most recent one I did. And that's one of the most successful things I've ever done.

Who has influenced you?

I would say definitely my dad because he’s a producer... I’ve learned almost everything I know from him. I would also just say the music I listen to every day, from... instrumentals to actual just rap music. Just hearing what types of flows and stuff how rappers do, seeing how I can use my creativity and how I know I can be like them.

Um, I don’t want to be super stereotypical, but I’d have to say my favorite rapper is definitely Lil Wayne, which is like a… that probably sounds ridiculous to some people, but his metaphors are incredible, he just never gets old.

One thing that inspires me is album setups. Like, if you ever listen to a full album in a row and you hear skits and stuff. That’s where people like Kendrick [Lamar] inspire me, and YG, and a lot of west coast rappers who kinda do that a lot. So, I didn’t try to make PTW like that, but I try to make sure that if you listen to PTW in a row it’s… it’s not a story, but it all makes sense, it all adds up. That definitely inspires me, like... I kind of want my next project to be an album.

What's on your iPod there? What are you enjoying listening to right now?

Okay, I’m listening to that Peach Panther by Riff Raff. That’s, like, the most hype album of the year right now. Any Future mixtape, that’s always shuffle music for my life. Um, I’m just gonna go through every single one and tell you my favorites.

Check out this more comprehensive list of Smitty's recent favorites.