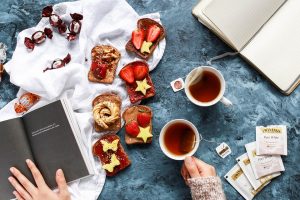 There’s nothing quite as satisfying as curling up with a good book and a cup of tea. So cozy, so soothing. Perfect for a chilly fall day. Read on for pairing suggestions that should please any tea-drinking bibliophile.

The Sweetness at the Bottom of the Pie

Nothing would go better with the tale of amateur sleuth and aspiring chemist Flavia de Luce than a cup of rich Assam tea and a slice of custard pie. In quick succession, eleven-year-old Flavia finds a dead bird with a postage stamp stuck to its beak and hears the last words of a dying man. Armed with a keen mind, an encyclopedic knowledge of poisons, and a trusty bicycle named Gladys, Flavia sets out to solve a most peculiar mystery.

A tea as light and fresh as an Oolong would pair well with this quirky, touching novel about friendship, advice columns, and life in wartime. Aspiring journalist Emmy’s life turns upside down when she accidentally takes a job as an assistant to imperious magazine advice columnist Mrs. Bird, thinking that she’ll be working at a newspaper. Though she is instructed to throw away all letters that deal with “unpleasantness,” Emmy soon finds herself responding to letter writers whose dilemmas range from the scandalous to the heartbreaking.

Just like that perfect cup of Masala chai, Dread Nation is bold and full of bite. The American Civil War was abruptly halted when the dead began to rise on the fields at Gettysburg. Years later, Jane McKeene is about to graduate from an elite battle school that trains students to put down the dead and protect their wealthy patrons. But hungry shamblers aren't the only enemy Jane faces and a political conspiracy will force her into a utopian community with a dark secret.