Some libraries will open for modified visits starting March 3. Find out what to expect when libraries reopen. 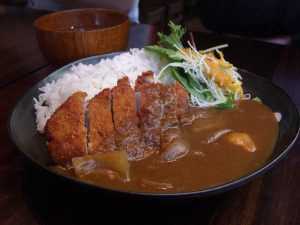 I've always loved Japanese food, but for a long time I was content to leave the cooking to the experts— That is, until I married someone who grew up in Japan. Suddenly I had a lot more motivation to do some at-home cooking, particularly when we struggled to find places that sold certain dishes on the Eastside that were anywhere in the realm of affordable.

Over the years I've gradually worked my way up from the basics, and now the cooking in our household has settled into a pattern of foods on the comforting, easier-to-make side of things, usually things like homemade ramen and various yoshoku dishes. Yoshoku, for those new to the term, is a style of Western-influenced Japanese cooking that takes foreign dishes and tweaks them to satisfy Japanese tastes. It has given us such delights as Korokke (aka Croquettes, aka breaded and fried potato heaven), Omurice (omelette filled with fried rice), and Spaghetti Napolitan (spaghetti stir-fried with ketchup and vegetables).

While we do a fair bit of internet searching for our recipes, some dishes can be a bit harder to find. This is where cookbooks come in, and there are two indispensable books in our collection we keep returning to time and again that I'd like to share.

First up is an older favorite, Takashi's Noodles, which gave me my number one love: ramen! So rich and flavorful, a good bowl of homemade ramen can satisfy on even the chilliest of days. Takashi's Noodles is where I started and I've been impressed with the quality and array of recipes. I will always love it most, though, for having the best shoyu ramen I've ever tasted. The only real tip I can add after making the broth about a hundred times is to add in some pork neck bones along with the chicken bones to pump up its fatty, gelatinous richness. I think I audibly happy-sighed just thinking about it.

And if there's any question about how to eat your ramen once you make it, Tampopo knows what's up:

The second book is newer find. Recently, I picked up Japanese Soul Cooking and I went through a journey with it— first shock, then awe, then dawning realization that this book contained almost all the foods my husband has ever waxed poetic about.

It starts with its own section on ramen. I appreciate that the shoyu ramen manages to simplify the process by combining some steps, such as cooking the broth and meat at the same time (genius!), and using a single mixture for both the broth and the ajitama (marinated soft-boiled eggs), all without letting the overall quality suffer.

"HOT" is perhaps an exaggeration, but delicious nonetheless!

Next is a chapter dedicated to homemade gyoza, followed by, surprisingly, an entire chapter on Japanese style curry from scratch! Often a little sweeter than other curries and with its own distinct flavor, Japanese style curry is something I am intimately familiar with— at least the kind that comes from the quick and easy sodium-filled squares in a box. Anyone who has ever searched the internet high and low for a true from-scratch Japanese curry, though, can tell you it's not an easy find.

After this gem, there's Tonkatsu! Korokke! Karaage (the tastiest marinated fried chicken bits you will ever be blessed to eat)! Soba! Donburi! Okonomiyaki! It just keeps getting better.

So, the important part: how are the recipes? Everything we've tried has been great, but I particularly like the tonkatsu and the retro beef curry. Overall a handy, unique cookbook!