G. Willow Wilson is one of those authors for me- you know the ones. The ones you trust. The ones that make your heart go a little funny every time you see they have a new book and you just can't rest until you get your hands on it. The ones that you talk up to anyone who will listen at every possible opportunity.

Wilson's books probably have this magical quality for me because they often defy description and bend genre in really interesting ways. While she is currently most well-known for creating the character Kamala Khan, a 16-year-old Muslim teen better known as Ms. Marvel, she's also written a handful of other books, both comic and regular. 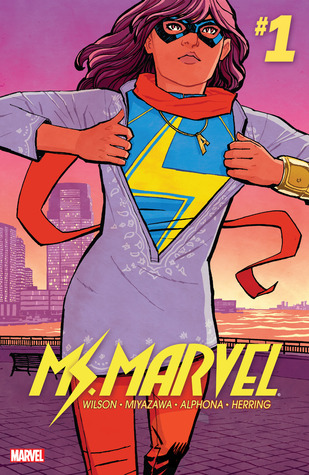 No matter what the genre or medium, though, all of Wilson's works have obviously been well-informed by her interesting life. Originally from New Jersey (ok, so she's technically a Seattle transplant, but I am claiming her for our own!), Wilson converted to Islam as a student at Boston College before moving to Cairo in her early 20s. There she worked as a journalist, writing for Western publications such as The New York Times Magazine and Atlantic Monthly, as well as for a local opposition paper. Amazingly, Wilson was also the first Western journalist to be granted a private interview with Ali Gomaa after he became the eighteenth Grand Mufti of Egypt. I think it's pretty safe to say, then, that she knows her stuff!

You can read about her time in Egypt by reading The Butterfly Mosque, a memoir that Wilson says is "about love, Islam, and life in Egypt during the waning years of the Mubarak regime."

If you want to jump into her comics, a good place to start is with one of her superhero tales like Ms. Marvel or A-Force, both of which are great for teens or adults and are wonderfully heavy on the girl-power.

Air, on the other hand, is a little different from her straightforward superhero stories. This was Wilson's first ongoing comic series and is one of the most unique I've read. It's a story centered on a flight attendant who's afraid of heights, and it's filled with love, magical countries that don't exist, conspiracy theories, and plenty of cliffhangers.

Wilson is also really great at magical realism that combines hyper-modern stories with Middle Eastern mythology. Alif the Unseen, her only sci-fi/fantasy novel to date, follows a Middle Eastern hacker as he gets mixed up with a djinn and finds himself on the wrong side of the law.

Cairo similarly mixes the old and the new, the magical and the real-life. It's well-told, funny, mysterious, and an all-around fun graphic novel.