Does anyone remember Ruth Chew, a prolific author and illustrator of children’s books pertaining to all things magic? I first encountered Ms. Chew after receiving The Trouble With Magic in second grade. In it, a brother and sister find a wizard named Harrison Peabody trapped in a bottle of air freshener purchased on clearance at the local drug store (normal!). After he assumes his regular size, the children hide the wizard in the attic, a feat made possible by the convenient fact that their parents are out of town. A series of magical adventures ensue, including an introduction to Peabody’s friend, a sea serpent named George, who happens to live in the lake at the park (also normal!).

Over the next few years, I would stumble upon many more Ruth Chew books. Almost all of them involve a brother and sister from Brooklyn uncovering some sort of magic, most of which tends to take place in Prospect Park. If the subject is not magic, it is witches…who are fairly hapless at magic. The stories are simple and fairly formulaic, with the action always unfolding in 150 pages or less against a delightful backdrop of charcoal drawings. 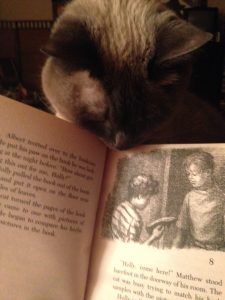 I love that within her well-honed formula, she was able to transport us through space and time. Ordinary kids from the suburbs would experience fantastic adventures after finding a common object around the house, on the ground, or in the garden. It could be a button that allowed you to travel through time or a pair of boots that let you cover many miles with a single step. You could run into a talking cat in the flowerbed or a sweet, quirky witch living in the house next door. The possibilities were endless within a world that was familiar to us all.

Over the years I would run across Ruth Chew books at random used book sales, but by the time I made a conscious decision to collect them, they were all well out of print. I continued picking them up here and there, all the while wondering why someone didn’t bring them back. The Harry Potter books were at the height of their popularity, and Chew’s work seemed perfect for kids who loved the books’ themes, but were too young to tackle Rowling’s huge tomes. Eventually I started buying Ruth Chew books online, where hard to find titles become instantly accessible. Most of the time, shipping cost more than the book itself and still didn’t exceed $5. They were neither valuable, nor especially rare, but the entire process probably took ten years. 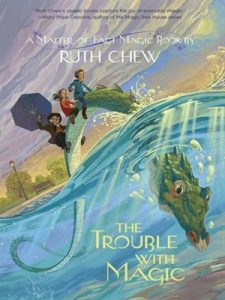 And then, shortly after I added the last book to my collection, Ruth Chew came back.  One day I was browsing our Overdrive catalog, and there she was, all shiny and downloadable for the modern age. With the click of a mouse a new generation of kids can enter a world of magic and adventure!