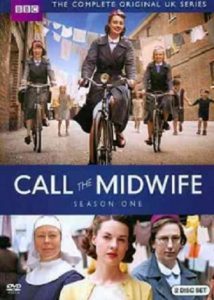 Call the Midwife follows a group of nuns and nurse midwives as they work to improve the lives and health of patients living in London's poverty-stricken East End in the 1950s. Despite the hardships and privation these characters face each day, Call the Midwife is bolstered by a sense of optimism and belief that acts of kindness and courage can make a positive impact in a seemingly indifferent world. Take a look at these other titles if you love the quirky characters, gentle humor and emotionally engaging drama of Call the Midwife.

The No. 1 Ladies' Detective Agency

Much like Call the Midwife, The No. 1 Ladies' Detective Agency balances the darker aspects of its plot with a sense of optimism and humor. After her father's death, Precious Ramotswe uses her inheritance to establish the first woman-run detective agency in Gaborone, Botswana. Along with her sidekick, Grace, Precious uses her own gentle style of investigation to uncover the truths surrounding the most unusual mysteries in Gaborone.

In 1946, Britain is just beginning to recover from the fear and hardship of WWII. When writer Juliet Ashton gets a letter from a resident of Guernsey, one of the Channel Islands, she is introduced to the story of the Guernsey Literary and Potato Peel Pie Society, which began as a ruse to prevent Guernsey residents from being arrested by occupying Nazi forces. As Juliet corresponds with the members of the society she is drawn into the lives these endearing characters.

Seventeen-year-old Dora Rare, the only female born in five generations of the Rare family, becomes the apprentice to her community’s midwife, Marie Babineau. As Dora learns her trade, she realizes that practicing midwifery in rural Nova Scotia in the early 20th century is not without its challenges. Some people see Marie and Dora as witches and the arrival of Dr. Thomas, who tries to convince residents to only use his new maternity hospital, threatens Dora’s traditional midwifery practices.

If you’re into medical dramas, especially the historical kind, try ANZAC Girls. Set during WWI, ANZAC Girls follows a group of nurses from Australia and New Zealand as they are sent into war zones to care for wounded and dying soldiers. The romanticism and idealism that accompanied their training is quickly erased by the bracing realities of war. Based on real-life letters and diaries of nurses in WWI, this show features compelling dramatic storylines as well as depictions of realistically gruesome, though at the time groundbreaking, medical care.