I read The Remains of the Day in high school and it kind of blew my mind. When it was assigned, I groaned over having to read a book about an elderly British butler. But the book was surprising and captivating. It was like nothing I had read before. When I finished it, I wanted to read it all over again from the beginning. I became an Ishiguro super fan.

So I'm thrilled Kazuo Ishiguro is now the recipient of the world's most prestigious literary award: the Nobel Prize. When I heard the news, I wanted to hug all of his books! But we only had one checked in (his latest, The Buried Giant) so I just hugged that one: 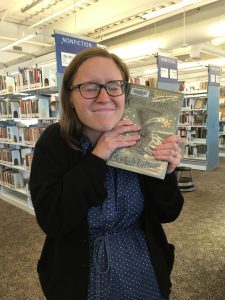 Kazuo Ishiguro is best known as the author of The Remains of the Day (which was made into an award-winning film starring Anthony Hopkins and Emma Thompson) and Never Let Me Go. You can check out his other great work in the KCLS catalog.

You can learn more about Kazuo Ishiguro at the British Council Literature website.