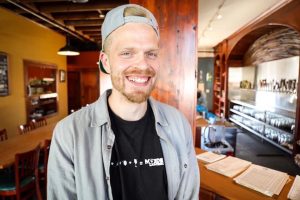 Seattle native Bobby Wood has been bartending, brewing, educating, and bringing joy to consumers and beer professionals for over a decade. In August 2016 Bobby became Washington State’s first Advanced Cicerone™. An Advanced Cicerone elevates the beer experience for consumers - think Sommelier, but for beer. He is the fourteenth person in the world to earn his Advanced Cicerone.

An experienced home brewer, Bobby focuses on mixed-fermentation and barrel-aged beers. He has consulted and collaborated to help brew these unique and technical styles with commercial breweries. He also trains staff at breweries, beer bars, and restaurants. During COVID-19, Bobby operates as a “work from home” bartender on a regular basis.

What first drew you to beer and brewing?

After graduating college, I moved to Busan, South Korea, to teach English. At that time, Busan’s beer landscape was abysmal. Faced with the choice between three all too similar macro-brewed lagers, I began brewing my own beer. That immediately escalated from a hobby to a passion and life path. In 2013, I co-founded Busan’s first homebrew club and brewed many times a week. I taught people how to brew while planning and executing seasonal homebrew festivals and competitions.

What are some styles of beer you wish people knew about or tried?

Gueuze! Some beers lean on hops to find their personality; others showcase different types of malt. Gueuze is a style of beer that is complex and a pure expression of the flavors of fermentation. Perhaps no style of beer requires more dedication, patience, and passion to create. A gueuze is a blend of different vintages of lambic, a spontaneously fermented, exclusively aged beer. By the time a gueuze producer is ready to sell a particular blend to a customer, there are components of those beers that are three, if not four or five years old!

What are you currently reading?

Lately I haven’t been able to put down Usborne Lift-the-flap Seasons and Weather by Holly Bathie. It’s my daughter’s favorite.