Welcome to the latest edition of Humans of Libraryland, where we dish on the lives of the folks who work for your public library! What keeps us awake at night? What makes us happy? What kind of weird hijinks do we get up to when we're not at the library? And why are the books drops locked during the day?

This week, I'm featuring... myself! So here's everything you ever wanted (or didn't want) to know about yours truly.

How long have you been in your current position?

Coming up on two years.

How long have you worked for KCLS?

What are your job duties in a sentence or two?

I like to think of myself as an information shepherd. It's my job to lead folks to the information they want or need while avoiding pitfalls along the way.

What is your favorite book? Why?

Oh, this is hard! The first book I ever bought with my own money (when I was 11) was a copy of the complete works of Edgar Allan Poe. I particularly love his short stories (see The Complete Stories) like The Cask of Amontillado, The Tell-Tale Heart, and The Masque of the Red Death. And I love his poetry, too, of course. I've even done theatre performances of The Raven before.

There's also a series of novels by Harold Schechter where Edgar Allan Poe is the main character and I *loved* them. The first one is called Nevermore. I love how the author captured Poe's writing style, and I love that he characterizes him as a cowardly genius, kind of like Ichabod Crane from The Legend of Sleepy Hollow.

The second book I ever bought was a copy of The Complete Works of William Shakespeare. Picking a favorite play is also just too hard, so I'll go with Hamlet, which I used for my senior thesis in college.

At work I'm Team All Books but I do most of my reading and listening on my phone and Kindle, so I think that makes me Team Digital Formats.

In which Hogwarts house would the Sorting Hat place you?

Okay, this is a funny story. I have always thought I was a Ravenclaw. I mean, I work at a library! But I cracked a joke to my partner while we were walking out of Fantastic Beasts and Where to Find Them about him clearly being a Slytherin (because he was obsessing over Colin Farrell's sweet wizard coat), which prompted us both to do the Sorting Ceremony on Pottermore. Turns out we're *both* Slytherins.

What is something you’ve learned in the last week?

I'm listening to Ron Chernow's biography of Alexander Hamilton and I was so impressed with both Hamilton and Jefferson's legendary productiveness (apparently Jefferson studied for up to 15 hours a day) that I decided I wanted to learn how to increase the amount of time I use productively. So I'm learning about bullet journaling, which is an interesting combination of to do list, planner, and diary. Here's the most helpful articleopens a new window I found about it.

What’s the last book, movie, or TV show that made you cry?

I can name one of each. The last book that made me cry was A Monster Calls by Patrick Ness. And I mean full-on, whole body ugly crying. It's a really cathartic novel for anyone who has experienced loss of a loved one.

The last movie that made me tear up was Hidden Figuresopens a new window, which is such an amazingly good movie! Katherine Johnson, Dorothy Vaughn, and Mary Jackson are my heroes!

Where do you most want to travel, but have never been? Why do you want to go there?

Ireland has always been high on my list; I was obsessed with all things Irish as an adolescent. And then I accidentally married into a *really* Irish family. I hear there's a tower with my (married) name on it in County Galwayopens a new window.

If money was no object, what would you do all day long?

Hmm. Naps would definitely be high on my list; also playing with my dogs, cooking fancy things, gardening, making stuff with my hands (anything from knitting to woodworking), singing really loudly, and (of course!) reading. I'd also get out and see more of the world; I love the idea of traveling, but I'm a real homebody so I always find excuses not to go anywhere.

What is your favorite song?

There are two songs that make me turn the volume up and dance whenever I hear them, no matter where I am. They are:

And We Dancedopens a new window by Macklemore from his album The Unplanned Mixtape (graphic language, fyi) and

Forget Youopens a new window by CeeLo Green from his album The Lady Killer. (There's a clean and a "dirty" version of this song. The one on the album uses graphic language, the YouTube link is for the clean version.)

When you were a kid, what did you want to be when you grew up?

I wanted to be an Egyptologist, a gemologist, a marine biologist, and either a gymnast or a figure skater depending on which Olympics were on TV at the time. So, put together... a lady Indiana Jones?

If you could witness any event past, present or future, what would it be? Why?

I have to admit that I'm a really big fan of Dr. Who, so I have probably spent an inordinate amount of time pondering time travel. =) I think I'd want to see ancient Egypt --maybe the reign of Queen Hatshepsut?-- and then I'd want to go see Shakespeare perform at The Globe, and then I think it would be fascinating to witness the (likely) destruction of Earth when our sun enters its red giant stageopens a new window in about 7.5 billion years. Or maybe the end of the universe? I hear there's a pretty good restaurantopens a new window there...

What’s your favorite thing about your job?

I really love helping people -- especially kids-- find something new to read. It's fun to learn about a person's reading habits and then take that information and turn it into a new book to try. It's especially rewarding when I'm working with folks who don't read much or are reluctant readers and I can find them something to be excited about.

What have you been up to lately? 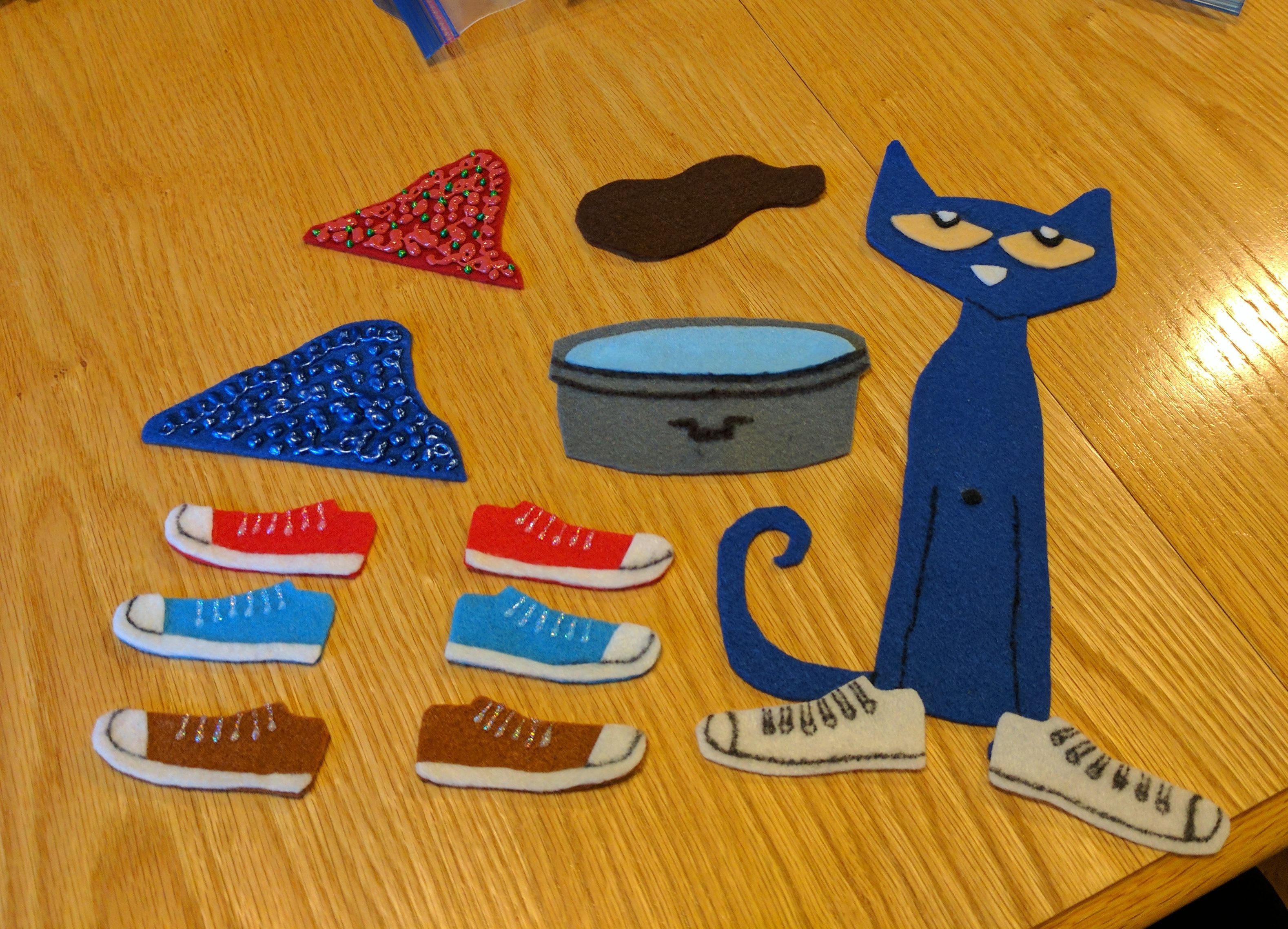 This is a felt set I put together for Pete the Cat: I Love my White Shoesopens a new window. 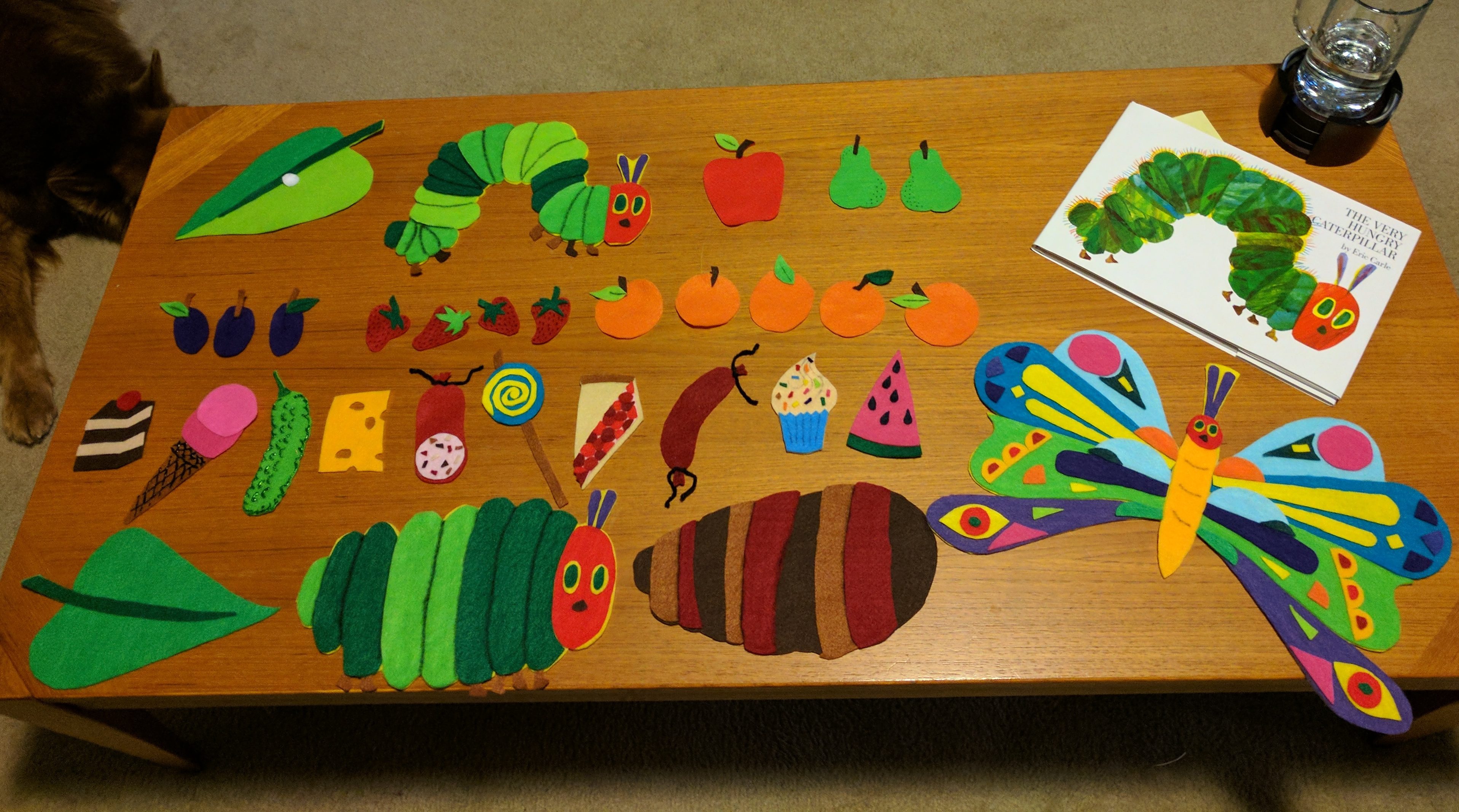 And here's the big one: a complete felt set for The Very Hungry Caterpillar. Hopefully, one of these sets will be coming to a Story Time near you!