KCLS is working on plans and protocols to accommodate a recent update to the Washington State Safe Start Plan. Learn more.

Shoreline Library is closed for construction. The book drop and curbside pickup are closed. Find out what to expect during the closure.

Welcome to the next edition of Humans of Libraryland, where we explore the lives and personalities of the people who work at *your* public library. Is cardigan wearing really a thing? How many cats do we have, collectively speaking? And what's the name of that one book-- with the blue cover?

This week we're chatting with a gifted librarian who's also a new mom! She's talented, enthusiastic, a little geeky, and probably sleep deprived. Give it up for teen services librarian, Jackie Lockwood, at the Newcastle library! 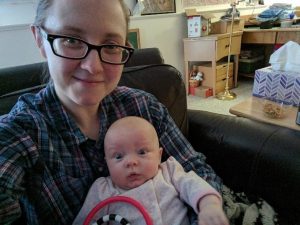 How long have you been in your current position?

One year and seven months.

How long have you worked for KCLS?

Six years. I started as a page at the Foster Library. I’ll never forget the day that I was picking up litter outside the library when somebody’s neighborhood chicken came out from behind a bush and startled me.

What are your job duties in a sentence or two?

If I had to explain what I do to an alien race, I think I’d say “I am a knowledge warrior. I fight for truth, inspiration, access, and creativity. Would you be willing to showcase your technology at a large library event? I think people will really be amazed by your time-bending goggles.”

What is your favorite book? Why?

I always develop new favorites as I get older and experience new things. When I was 11 my favorite book was Matilda (also available in these formats, opens a new window) because I loved Quentin Blake’s illustrations and I wanted to believe that if I was smart enough I could develop the ability to do anything.

Right now my favorite book is Being Mortal by Atul Gawande (also available in these formats, opens a new window) because the subject of aging and dying is so difficult for me to handle that I’m relying on my husband to read it out loud to me. Gotta respect a book that has such a strong impact.

Are you Team Book or Team eBook?

I used to be firmly in Team Book. Then I became a mother and found that the only way I could read while nursing my daughter was to put several eBooks on my phone and set it on the nursing pillow behind her beautiful little head. That worked for the first few months of her life, until she became more mobile. Now I’m on Team Audiobook.

In which Hogwarts house would the Sorting Hat place you?

According to the Pottermore website, opens a new window, I’m in Ravenclaw.

(For those wondering, the official count for the series is 4 Ravenclaws, 2 Gryffindors, 2 Slytherins, and 1 Hufflepuff. And one vote for Aslan. 🤔 -The Editor)

What is something you’ve learned in the last week?

Microwaves and wireless routers both emit radio waves at a frequency of 2.4 Gigahertz.

What’s the last book, movie, or TV show that made you cry?

I seem to cry at everything these days. Hidden Figures? Cried.

Falling Over Sideways by Jordan Sonnenblick? Cried. I make sure to drink a lot of water.

If money was no object, what would you do all day long?

Where do you most want to travel, but have never been? Why do you want to go there?

Iceland! I love the fact that it sits directly over a divide between two continental plates. I enjoy visiting Mount St. Helens and would love to see some other volcanoes, dip in hot springs, and eat Icelandic lava bread.

🎶 Butterfly in the sky

I can go twice as high

It’s in a book

When you were a kid, what did you want to be when you grew up?

If you could witness any event past, present or future, what would it be? Why?

I hope to be alive when a human sets foot on Mars. I’d like to believe that if we can do that, we can do anything.

What’s your favorite thing about your job?

Getting to be a person who discovers things and shares them with others for a living.

What was the last video or computer game you played?

I run a monthly club at the Newcastle Library. I’m always learning new things, like what orbital inclination is, and how to adjust it so that my spacecraft will actually reach a moon instead of shooting by it. Turns out planets and moons aren’t all lined up tidily on the same plane. Nothing is ever simple!

She's really not kidding about Kerbal Space Program being challenging (and fun!): you might learn an awful lot about physics if you play it long enough to, say, get to Mun (that's Kerbin's moon y'all) or strand a Kerbal in space like in The Martian.

Thanks for the chat, Jackie! You're doing amazing work.