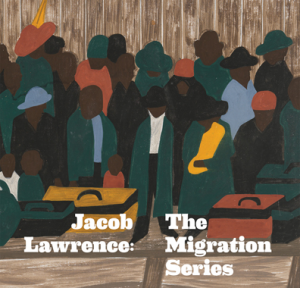 Editor's note: event and related exhibit occurred in the past.

Exciting news for art fans and history buffs alike: on January 21, 2018 the Seattle Art Museum will be marking the 100 year anniversary of the birth of artist Jacob Lawrence with the return of his Migration Series! This collection of 60 paintings depicts scenes and stories from the Great Migration, a time beginning in the 1910s when many African-Americans moved from the rural south to the urban north in search of a better life.

Seattle has long claimed Lawrence as one of our own due to the fact that he lived in Seattle from 1970 until his death in 2000, 15 years of which was spent working at University of Washington. His artistic roots, however, were in New York and the Harlem Renaissance. Long before moving to Seattle he established his artistic style (what he called dynamic cubism) with the Migration Series, which first brought him recognition at just 23 years old!

Take a look at the materials below (some which focus on Lawrence, but some of which also look at broader stories of the Great Migration).

Jake Makes a World is a picture book biography that follows the creative adventures of a young Jacob Lawrence as he finds inspiration in the vibrant colors and characters of his community in Harlem.

This Is the Rope is a family-centered story of the Great Migration told by the wonderful Jacqueline Woodson, author of Brown Girl Dreaming. It follows the story of a family's journey north, focusing on a rope that becomes a part of their history and is passed between generations.

This Is the Rope

This book takes a look at Jacob Lawrence and the Migration Series, and it was listed among the Best Nonfiction Books of 2015 at KCLS!

In The Warmth of Other Suns, Pulitzer Prize-winning author Isabel Wilkerson chronicles the Great Migration in an epic history that covers a period from the 1910s to the 1970s, and is told through the stories of three individuals and their families.

The Warmth of Other Suns

If fiction is more your speed, check out The Twelve Tribes of Hattie. Rooted in the legacy of the Great Migration, the story follows an African-American family held together with a mother's grit and monumental courage.

The Twelve Tribes of Hattie

By River, By Rail is a film that features Jacob Lawrence, Maya Angelou, and other well-known African-Americans as they "recount the story of the migration, of separated families, and of the hardships, prejudice, and struggle for acceptance in the North that resulted in disillusionment" (from film description).

By River, by Rail